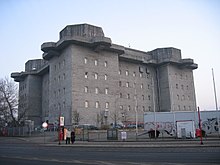 The G-Tower was transformed into a nightclub with a music school and music shops. In October 2019, the NH Hotel Group announced plans to turn it into a luxury hotel above it with a Forest, with construction took in 2021 and opening in 2022. During Construction got the improved height of 58 m with some additional floors and stairs around becoming 13 in total.[6] This tower, containing six levels below the rooftop, includes in its design, as part of its air-raid shelter, two identical spaces for protection against gas attacks, one on the first floor (above ground level) and the other on the second floor. Both in Tower 1, they are about 300 sq. m. (3,230 sq. ft.) in area, and have six windows (openings in the wall).[7] The L-Tower was demolished after the war and replaced by a building owned by T-Mobile. 53.55285°N 9.967314°E.